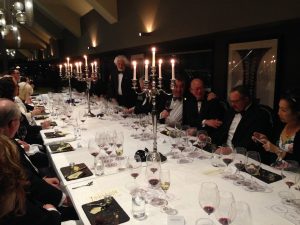 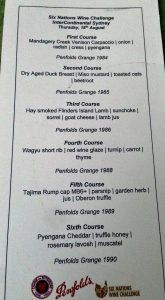 The spiel for this event carried with it lots of promise and on the night we were not disappointed.

The first treat was to be escorted to the beautiful Harbour Room of the InterContinental Sydney with its sweeping views of Sydney Harbour.

The evening itself (while financially ‘interesting’) provided the 24 participants with a privileged tasting and appreciation of 6 Grange Vintages – 1984,85,86,88,89 and 1990.

The influential six Judges of the Six Nations Wine Challenge were on hand to discuss each vintage. This was an added treat.

And the verdict? Well, all wines were sound and were also fantastic. I was seated next to the New Zealand judge and his intake of breath at each sampling was a delight. I am not sure whether ‘bloody hell, that is fantastic’ is strictly correct wine judging parlance but it worked on the night.

We commenced with the 1984 and the palate lingered on. I loved it. Year after year were then served by our attentive Sommelier and the evening just got better. The 1990 was perhaps the favourite of the evening but all wines were interesting and all proved to be ambassadors for the Grange label.

The evening commenced with an Ayala Champagne and concluded with a 1945 Penfolds Port.

Membership of La Chaîne does open doors to new experiences

In the five years the Australian Chaîne has been involved in the international Young Sommeliers Competition the Association of Australian Boutique Winemakers/Six Nations Wine Challenge and its founder and CEO, Judith Kennedy have been supporters and sponsors.

Following the Grange dinner Judith transferred $2,400 to our accounts to support our future involvement. A heartfelt thanks Judith.